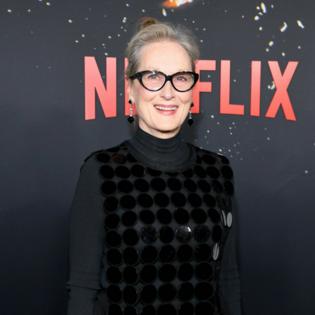 Meryl Streep is a huge fan of 'The Real Housewives of Beverly Hills' but worries the show is a distraction from the real issues.

The 'Don't Look Up' star admitted to using her love of the Los Angeles-based series of the Bravo reality franchise as a distraction from the climate crisis.

The 72-year-old actress said: "It's life… it's right now. It's happening right now. And what do I do? I go in and watch the 'Housewives of Beverly Hills'. I do that."

The 'Sophie's Choice' star made the revelation while promoting the new Netflix movie in which she plays President Orlean, as the film satires the public's very polarised reactions to scientific crises.

Meryl praised the movie's director Adam McKay, adding: "When I saw the film, I was just blown away, and I said [to director Adam McKay], "Give me a checklist. Give me the first three things we have to do [about the climate crisis]' "

The 'Little Women' star joked that if we don't work to halt climate change - which threatens basic human survival - we won't be able to catch up with Dorit Kemsley, Lisa Rinna, Erika Girardi, Kyle Richards and Crystal Kung Minkoff and their latest drama.

She said: "This is what we have to pay attention to. It all flows from this. If we don't survive, we won't be able to watch 'Housewives' or whatever."

The 31-year-old Oscar-winner has previously gushed about her love of all things 'Real Housewives'.

In 2014, she said: "'I do love my 'Real Housewives'... New York Housewives, and Beverly Hills, New Jersey and Atlanta Housewives. I mean, I love them all, but Miami - oh, my God! Miami is really special."

Chloe Bailey finds being compared to her sister, Halle, "shallow" and "disturbing".

The 23-year-old singer found it "so empowering" finding fame alongside her sibling in duo Chloe x Halle but can't understand why people ...Read More

Britney Spears' father has requested her medical records be made public.

The 'Toxic' singer's conservatorship was ended in November after 13 years, but a legal battle is still in place over the details of the completion ...Read More

Martha Stewart ended her relationship with Sir Anthony Hopkins because she "couldn't stop thinking about him" as Hannibal Lecter.

The 80-year-old lifestyle guru admitted she dated the veteran actor in the 1990s but ended ...Read More

Anna Kendrick has been "quietly" dating Bill Hader for the last year.

The 'Pitch Perfect' actress reportedly struck up a relationship with the 43-year-old actor - who she starred with in Disney+'s 2019 Christmas movie '...Read More

Joshua Jackson is to star in the upcoming 'Fatal Attraction' TV series.

The 'Affair' actor is set to star as Dan Gallagher opposite Lizzy Caplan as his spurned former fling in Paramount+'s reimagining of the classic 1980s...Read More

Ricky Gervais has offered to host the Oscars for free - if he can say what he wants.

The 'After Life' creator admitted he doesn't think he'd ever be asked to anchor the Academy Awards because his comedy is too ...Read More