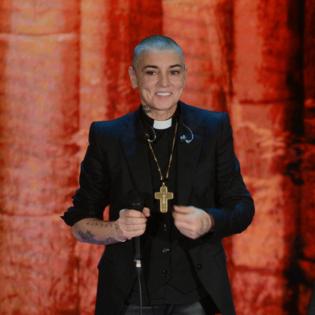 Sinead O'Connor has been admitted to hospital, just days after her 17-year-old son was found dead.

The 55-year-old singer admitted she feels "lost" without her boy, Shane O'Connor, who passed away last week, and she "hates" herself, but is hoping to get some help in hospital.

She wrote on Twitter: "I'm sorry. I shouldn't have said that. I am with cops now on way to hospital. I'm sorry I upset everyone. I am lost without my kid and I hate myself. Hospital will help a while. But I'm going to find Shane. This is just a delay (sic)"

Her tweet came after she posted a flurry of messages, claiming she "doesn't deserve to live" and blaming herself for her lad's death.

She wrote: "I'm a piece of s***. I don't deserve to live and everyone who knows me will be better off without me. I am sorry for all the harm I caused.

"I'm on my own the last three days. Because I'm S***. And rightly, no one wants to know me. I've upset Shane's dad because I tweeted the funeral. I'm such a t***. I'm sorry Donal. I'm lonely. Twitter is for lonely people. Monsters like me gET terribly lonely.

"I was a f*** up from the day I was born. It's not my parents fault or my family or childrens fault. It's mine. God made me wrong. So I'm sending myself back and I'm finding the. Only person on this earth who ever truly loved me. (sic)"

Last weekend, Sinead - who changed her name to Shuhada' Davitt in 2018 - revealed she had formally identified Shane's body.

She wrote on social media: "I have now formally identified the remains of my son, Shane. May God forgive the Irish State for I never will. (sic)"

A day earlier, the 'Nothing Compares 2 U' hitmaker took to Twitter to reveal her son had been found dead.

She tweeted: "My beautiful son, Nevi'im Nesta Ali Shane O'Connor, the very light of my life, decided to end his earthly struggle today and is now with God. May he rest in peace and may no one follow his example. My baby. I love you so much. Please be at peace. (sic)"

Shane had been missing, and the police in Ireland previously admitted to being concerned for his welfare.

The 'Tragedy of Macbeth' actor has admitted he learned "everything" from the iconic filmmaker while working with him on the new big screen adaptation of William ...Read More

Marc Almond is filled with "anxiety and angst" whenever he starts a Soft Cell project.

The synth-pop pioneers release their first album in two decades, 'Happiness Not Included', next month, and while Marc has admitted he ...Read More

Julia Fox has hit back at claims she is dating Kanye West for "attention".

The 31-year-old actress insisted that their relationship is real and denied accusations that she is with the 44-year-old rapper for fame and money...Read More

Kelly Osbourne and Slipknot's Sid Wilson are "very happy together".

The 37-year-old TV star and the 45-year-old musician started dating recently, after first meeting in 1999, and friends of the couple have revealed that ...Read More

Adele has paid tribute to her "gracious" fans after postponing her Las Vegas residency.

The 33-year-old singer was forced to postpone her shows at Caesars Palace at the last minute after COVID hit her backstage team, and ...Read More

Melissa Leo has blasted Hollywood for an "appalling and unhealthy" portrayal of women.

The 'All My Children' actress - who made her acting debut as Linda Warner in the US soap opera back in 1984 - admitted she wants to ...Read More