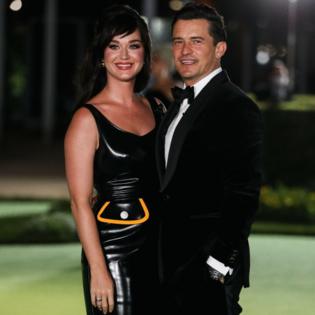 The 37-year-old pop star has Daisy, 16 months, with actor Orlando Bloom, and Katy thinks that her baby girl is a "combination" of both of her parents.

Katy explained: "Daisy is great. She is a combination of both me and her father, which we are fearless with lots of chutzpah and just big characters. So the combination of us both is definitely coming out."

The 'California Gurls' hitmaker has relished the challenge of motherhood.

Katy has also welcomed seeing the world through the eyes of her daughter.

Speaking to People, Katy shared: "It's amazing to see everything new again through a toddler's eyes."

Katy previously described her daughter as "the greatest gift" and admitted that motherhood had transformed her life.

She said last year: "[Daisy] is the greatest gift I've ever received. I think what children do, in general, is teach you that all you need is love."

Katy has embraced parenthood - but she also confessed to struggling amid the COVID-19 pandemic.

The chart-topping pop star - who was previously married to comedian Russell Brand between 2010 and 2012 - shared: "I've had my breaking points. I made a conscious decision to become a mother, but I didn't know until I became a mother that you have to strike a balance.

"[Motherhood is] all the cliches and more. Let me tell you as someone who has done and seen everything, there's nothing better than having a beautiful, pure child. They're just the epitome of love."

Katy also revealed that she turned to some "trusty dusty tools" to look after her mental health during the pandemic.

She said: "Sometimes I struggle with anxiety and depression and I need to go into my toolbox and pull out some of those trusty dusty tools. It's easy to pull out a bottle of wine but it just gets harder."