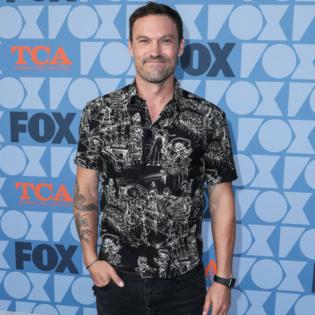 Brian Austin Green is said to be "happy" for his ex-wife Megan Fox after she got engaged again.

The 48-year-old actor - who has three children, Noah, nine, Bodhi, seven, and Journey, five, with the 'Transformers' actress - is "good" with the star's engagement to rapper Machine Gun Kelly as long as she and Brian are "on the same page with the kids".

A source told PEOPLE: "As long as they're both on the same page with the kids, he's good and happy for her.

"He's got another woman that he's super into. He's entirely moved on."

The 'Don't Blink' actor - who also has son Kassius, 19, from his previous relationship with Vanessa Marcil - has moved on with 'Dancing With The Stars' professional dancer Sharna Burgess, who he started dating in October 2020.

Speaking about Sharna, Brian - who confirmed he and Megan had split after nearly 10 years of marriage in May 2020 - previously said: "On our first date, we just completely lost track of time and the same thing happened the next time. It became something noticeably different from anything I'd ever experienced before.

"I wasn't sure what that meant until the first time we kissed, and then it was the attraction and a whole bunch more. It was really cool. And we really have the same moral compass."

Earlier this week, Kelly popped the question to 'Jennifer's Body' actress Megan in Puerto Rico under the same "banyan tree" where they fell in love, and the happy couple celebrated by "drinking each other's blood".

MGK - whose real name is Colson Baker - wrote on Instagram: "Yes, in this life and every life. beneath the same branches we fell in love under, i brought her back to ask her to marry me.

"I know tradition is one ring, but i designed it with Stephen Webster to be two: the emerald (her birth stone) and the diamond (my birth stone) set on two magnetic bands of thorns that draw together as two halves of the same soul forming the obscure heart that is our love. (sic)"

Megan shared a video of the proposal and wrote: "In July of 2020 we sat under this banyan tree. We asked for magic

"We were oblivious to the pain we would face together in such a short, frenetic period of time.

"Unaware of the work and sacrifices the relationship would require from us but intoxicated off of the love. And the karma.

"Somehow a year and a half later, having walked through hell together, and having laughed more than I ever imagined possible, he asked me to marry him.