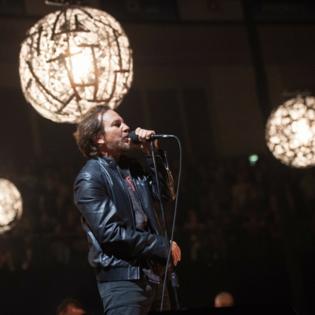 The Grunge veteran has also released the moving new single, 'Brother the Cloud', and shared the heartwarming story of how the vocals of his late father, who died when he was 13, made the record.

In an interview with MOJO magazine, Eddie shared: "I didn't really get to know my real father.

"But the crazy thing that did happen was that about 10 years ago, the Chicago Cubs, some of their old timers get together and play baseball for about a week, and I would go down there every other year and hang with these guys, learn about the game more so I can teach my kids more, you know, I coach baseball.

"One of the ex-players, this erudite badass trumpeter, who used to play third base, his name is Carmen Fanzone.

"He also became head of the Musicians Union in Los Angeles - an incredibly cool individual. I saw Carmen playing the horn in a little club in Arizona, and this guy playing keyboards with him had been best friends with my dad.

"Two years later, he brought me some photos of them in little basement studios.

"Then a couple years after that, he brought me five songs of my dad singing, on a disc. I carried that disc around for two, three months in my suitcase, not ready to hear it.

Zoe Kravitz found shooting 'The Batman' amid the COVID-19 pandemic to be "a little bit sad".

The cast and crew were all forced to follow strict rules while filming the much-anticipated movie, and Zoe admits it was a "very...Read More

Bryan Cranston has hailed Louie Anderson as an "expert in the craft of comedy".

John Stamos thinks Bob Saget would be pleasantly surprised by the "love" he's received since his death.

The comedian passed away on January 9, at the age of 65, and John - his former co-star on the TV sitcom 'Full House' ...Read More

The 44-year-old rap star has taken to Instagram to call for "final edit and approval" of the documentary, 'Jeen-Yuhs', which is due to premiere ...Read More

The 32-year-old actress plays Pamela, 54, in the new drama series 'Pam & Tommy', and she's admitted to being in awe of the TV star during her younger years.

Khloe Kardashian feels "crushed" after Tristan Thompson confessed to fathering a child with another woman.

The 30-year-old basketball player - who has True, three, with the reality star - was recently revealed to have ...Read More