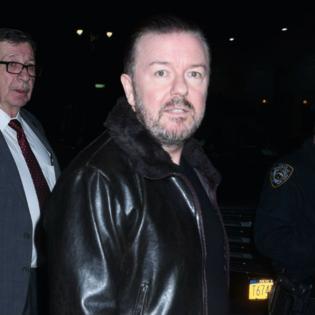 Ricky Gervais wants to be "more like Larry David".

The 60-year-old star would prefer to be more like the 74-year-old comedian, who according to Ricky, "doesn't explain anything".

Talking about his experience of social media, Ricky - who has more than 14 million followers on Twitter - explained: "There is an equality to Twitter, which should be a good thing … but you can have a man who shouldn't be allowed sharp objects, living in a bin saying really horrible, racist, misogynistic things. And then you'll get Richard Dawkins or someone saying something important. And they're both in the same font, in the same place. So it's confusing.

"If I want to make a point now, I keep it to the art. I've explained too much in the past. I've found myself explaining jokes within jokes. I want to be more like Larry David. He doesn't explain anything."

Ricky thinks some people take his comedy too seriously.

The stand-up star also admitted that he'll adopt any position in order to make people laugh.

The 'After Life' actor told NME: "Some people think a joke is the window to a comedian's true soul. That's just not true.

Ricky also feels the world has become more "judgmental and hypocritical" than ever in recent years.

He said: "I've never seen a world that is so judgemntal and hypocritical as it is right now.

"I honestly think it's about controlling the tribe. Once upon a time, if a guy was good at collecting coconuts or they were brave, we'd choose to work with them. It was about achievement and competence. That's how we got status. But at some point, we worked out that we could obtain status via virtue too."

Chloe Bailey finds being compared to her sister, Halle, "shallow" and "disturbing".

The 23-year-old singer found it "so empowering" finding fame alongside her sibling in duo Chloe x Halle but can't understand why people ...Read More

Britney Spears' father has requested her medical records be made public.

The 'Toxic' singer's conservatorship was ended in November after 13 years, but a legal battle is still in place over the details of the completion ...Read More

Martha Stewart ended her relationship with Sir Anthony Hopkins because she "couldn't stop thinking about him" as Hannibal Lecter.

The 80-year-old lifestyle guru admitted she dated the veteran actor in the 1990s but ended ...Read More

Anna Kendrick has been "quietly" dating Bill Hader for the last year.

The 'Pitch Perfect' actress reportedly struck up a relationship with the 43-year-old actor - who she starred with in Disney+'s 2019 Christmas movie '...Read More

Joshua Jackson is to star in the upcoming 'Fatal Attraction' TV series.

The 'Affair' actor is set to star as Dan Gallagher opposite Lizzy Caplan as his spurned former fling in Paramount+'s reimagining of the classic 1980s...Read More

Ricky Gervais has offered to host the Oscars for free - if he can say what he wants.

The 'After Life' creator admitted he doesn't think he'd ever be asked to anchor the Academy Awards because his comedy is too ...Read More