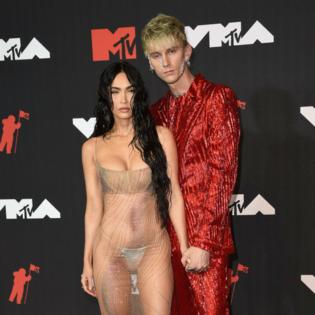 The 31-year-old rap star recently popped the question in Puerto Rico - but his proposal caught Megan by surprise.

A source explained: "She has been wanting to get engaged. The proposal was a surprise, though. They have traveled to Puerto Rico before, so Megan just assumed it was another vacation."

Megan, 35 - who has Noah, nine, Bodhi, seven, and Journey, five, with her ex-husband Brian Austin Green - loved the proposal and "thought it was beautiful and perfect".

The insider told People: "She is excited to get married."

The loved-up duo first started dating in May 2020 after meeting on the set of 'Midnight in the Switchgrass'.

Meanwhile, an insider recently explained that Machine Gun Kelly wanted his proposal "to be very special".

The music star popped the question under the same tree where they first fell in love, as he wanted to do something "romantic".

The source said: "MGK has been telling his friends how Megan is his dream girl and he is always trying to make her happy and do romantic things for her.

"His proposal plan was no exception and he wanted it to be very special.

The 75-year-old actor claimed his 'Succession' co-star "pushed" for the high-profile feature - which was ...Read More

Louie Anderson has been admitted to hospital following his cancer diagnosis.

The 68-year-old comedian is receiving treatment at a medical facility in Las Vegas and is said to be "resting comfortably" after being diagnosed...Read More

Zoe Saldaña is "proud" of Britney Spears for "stepping up for herself".

The 43-year-old actress is very impressed with the way her 'Crossroads' co-star spoke out to ultimately have the conservatorship she had been under ...Read More

Sara Bareilles feels "a profound, holy relief" after taking medication "for the first time" to battle her depression and anxiety.

The 'Brave' hitmaker - who opened up about her mental health struggles earlier this month ...Read More