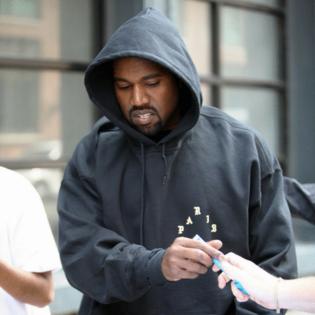 Kanye West has been named as a suspect in a criminal battery investigation.

The 44-year-old rap star - who legally changed his name to Ye in 2021 - has been accused of punching a fan outside the Soho Warehouse in Los Angeles in the early hours of Thursday (01.13.22) morning.

Kanye got into an argument outside the members-only club after a fan asked him for an autograph.

A source told Fox 11 that Kanye was sitting in his car when he was approached by the fan. The rap star is alleged to have emerged from his vehicle, exchanged insults with the fan, before knocking him to the ground with a punch.

Police were subsequently called to the scene, but Kanye had already left by the time they arrived.

The fan - who refused medical treatment - is said to have captured the altercation on his phone. However, the police have yet to speak to the 'Stronger' hitmaker.

However, an insider has claimed that the rapper is simply trying to "get under [Kim's] skin" with his new romance.

The source explained: "It's a desperate play for attention. There's no other explanation when he chooses … [Julia] to go public with."

The outspoken rapper is still said to be hurting after Kim, 41 - who has North, eight, Saint, six, Chicago, three, and Psalm, two, with Kanye - started dating comedian Pete Davidson.

Another insider suggested that Kanye's recent behavior has been "very strange", as he's spoken about rekindling his romance with Kim while also dating other women.

The source said: "He publicly fights for his family back, and then he's linked to all these different girls. It's very strange."

Harry Styles is looking to buy a property in Cornwall.

The 27-year-old pop star - who shot to fame as part of One Direction - has been looking at expanding his property portfolio and is keen to buy a place in the ...Read More

The 50-year-old singer has revealed he sometimes upsets fellow hotel guests when he's on the road, because he'll often fall asleep with the TV on.

Garrett Hedlund has been arrested for public intoxication.

The 37-year-old star was taken into custody on Saturday night (01.22.22) in Franklin County, Tennessee, TMZ reports.

Hedlund has already been released on a $2,...Read More

The iconic actor passed away on January 6, at the age of 94, and his family have now confirmed that his memorial service will be a private, family affair because ...Read More

The Grenadier Guards reportedly want the Duchess of Cambridge to replace Prince Andrew as their colonel.

The 61-year-old prince's military titles and royal patronages were returned to the Queen earlier this month, and ...Read More

The Spice Girls are set to be reunited at Brooklyn Beckham's wedding.

The 22-year-old star is poised to marry actress Nicola Peltz in Florida in April, and Victoria Beckham has invited her former bandmates - Mel B, ...Read More