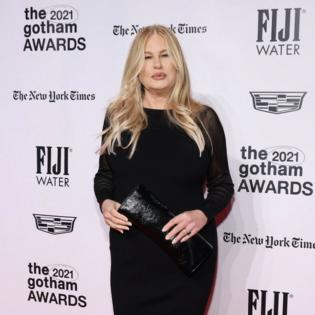 Jennifer Coolidge thinks the COVID-19 lockdown was "like an acid trip".

The 60-year-old actress found lockdown to be a surreal experience, likening it to taking "some really weird drug", and Jennifer admitted that she feared for her life amid the pandemic.

The Hollywood star told the Los Angeles Times newspaper: "Being locked up during COVID was sort of like an acid trip or something … I felt like I had taken some really weird drug because all of these scenes in my life were being played out. And I wasn't taking any drugs, I was just eating a lot.

"I wasn't drinking alcohol. I just … I felt like each day was sort of like I was hallucinating because my mother's death came up [in] all of these things. And I think it was just because, you know, I didn't really think we were going to survive the COVID thing.

"I mean, I really didn't. I thought it was just a matter of time before it got all of us. And I felt like the moment was just lingering outside."

Jennifer recently confessed that she was "eating [herself] to death" and put on "between 30 to 40 pounds" amid the pandemic.

The actress admitted to "excessive" comfort eating during the global health crisis, and revealed she didn't want to film after over-indulging on Vegan pizzas.

Jennifer - who played Jeanine Stifler in the 'American Pie' film franchise - said: "I just didn't want to be on camera that fat because of my excessive eating during COVID.

"I thought we were all going to die, I really did, so I was just eating myself to death. Vegan pizzas, sometimes five or six in a day."