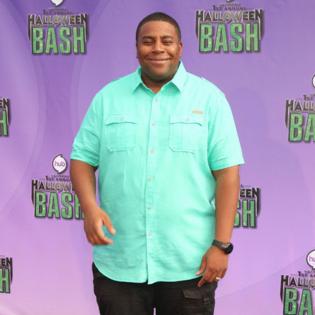 The 43-year-old comedian is thrilled for his 'Saturday Night Live' co-star, but Kenan confessed that he never saw their romance coming.

He said: "I think we all were [surprised]. It kind of came out of left field, but I don't know. It's nice to see love if it can last."

Kenan is pleased that Pete, 28, and Kim, 41, have found happiness with each other.

He told Us Weekly: "If they're happy, I'm happy. I don't really know their business like that, but I know they're two both seemingly great individuals. Like, I know Pete a lot more. That's my little bro, so, as long as he's good, I'm good."

Meanwhile, an insider recently claimed that Pete is "exactly what [Kim] needed" after her split from Kanye West.

The comedy star - who has previously dated the likes of Kate Beckinsale and Kaia Gerber - is helping the brunette beauty to move on from her marriage.

The insider said: "He's exactly what Kim needed after her divorce - someone to make her laugh and just have a fun time with.

"The end of her marriage was a very dark time for her and Pete has been the best antidote."

Pete is determined to make their burgeoning romance his number one priority.

The comedian has been making frequent trips between Los Angeles and New York in an effort to make their relationship work.

The source shared: "He's flying back and forth and spending more time in LA when he can to see Kim. He's so into her and is always 'my girl' this and 'my girl' that."