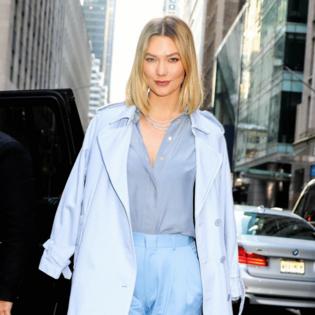 The 29-year-old model - who gave birth to her first child, Levi, on March 11 - admits that becoming a mom has totally changed her life, explaining that she now doesn't "make a move without asking [her] mom friends" first.

She shared: "The mom group friendship thing - I was always like, Yeah, that's cute but that's not going to be me. [Now] I don't make a move without asking my mom friends."

The blonde beauty - who married businessman Joshua Kushner in 2018 - has also reexamined her relationship with her body after giving birth.

She told WSJ. Magazine: "I love my body in a way that I never have.

"I never imagined that I would have a career [in which] my body would be so intertwined with my success or failure. That's something that I really don't like about being a model, but - it's part of the job."

The model revealed she was "loving everything salty and crunchy" as she prepared for the arrival of her first child.

She said at the time: "I've always had bizarre cravings, so it's kind of nothing new, but I've really been loving everything salty and crunchy."

Karlie also noted how her pregnancy had a noticeable impact on her stamina levels.

She explained: "I normally love running but I have to say I'm out of breath these days just talking or going up a flight of stairs.

"Being pregnant has put a little bit of a damper on my running routine but I still have been trying to stay active no matter what, going for lots of long walks."