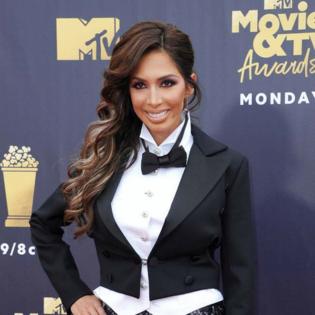 The 'Teen Mom: Family Reunion' special is full of "drama".

Farrah Abraham has revealed she was physically attacked during the shoot, and that she had to warn her castmates to "keep their hands to themselves".

She told TMZ: "I think I could walk through the door and like, drama is going to happen, sadly.

"I just warn others to keep their hands to themselves. Do not sneak attack a woman, and do not gang up on a woman, because I don't handle that too well. So that's kind of what happened to me."

Asked whether any "physical drama" took place, Farrah replied: "Yeah, and I think people should not physically attack you."

Farrah, 30, also accused her castmates of living "in the past".

She said: "Especially after COVID and every other thing going on in our real world of news, don't touch people. I still think a lot of the people who are on 'Teen Mom' live in the past. I hope I'm bringing 'Teen Mom' to, like, the 2022s of our world. And I don't live in the past, I live in the future."

Meanwhile, Farrah previously insisted she will not be "sex-shamed" on social media.

The reality star posted an Instagram video of herself dancing while wearing a very revealing bikini and a captain's hat on a yacht, as her daughter Sophia, 12, watched on.

Some of Farrah's social media followers were quick to criticize her behavior, but she insisted she was simply proud of her body.

Farrah said at the time: "I feel like a lot of moms are sex-shamed - which I have definitely have been in my life - and I think when I'm single, gorgeous, young and beautiful, I would almost regret looking back at my life not living a happy, outgoing life. And I would definitely hope my daughter is never shamed to cover up herself and not be her happiest."