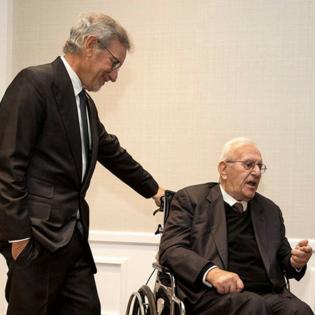 Steven Spielberg has "dedicated" 'West Side Story' to his late father.

The 74-year-old legendary director has honored his dad Arnold Spielberg - who died last year and was incredibly supportive of his son's career - with his remake of the 1961 Jerome Robbins classic, as his dad was a huge fan of the original.

He told Digital Spy: "My dad loves 'West Side Story', he's seen a number of productions of it. He was 103 and a half when he passed, and I hadn't finished the film yet, but he was kind of on the set sometimes because he'd be in LA and we'd be in New York shooting, and he'd be on the iPad on FaceTime, and he'd be able to watch the set ups and watch some performances.

"We'd bring the iPad over to the monitor so he could see the playbacks... at that point he was too elderly to travel to the set, to New York, from LA. It was the only film set that he has not visited. The only one.

"He came to Poland for 'Schindler's List', he came to England for the 'Indiana Jones' movies, and I just felt that he'd loved it so much and I was so sad he couldn't see it that I dedicated the film to him."

The original movie - which was based on the 1950s Broadway show, in turn was inspired by William Shakespeare's 'Romeo and Juliet' - faced criticism for casting white people to play Puerto Rican characters

Along with casting more Latinx talent - including giving a new part to 89-year-old Rita Moreno, who played Anita in the 1961 film - such as Rachel Zegler, David Alvarez, and Ariana DeBose, the 'Jaws' director decided not to subtitle the movie when Spanish was spoken to preserve the "dignity" of the language.

He explained: "I felt that subtitling the Spanish was disrespectful to the second language of this country and that it would make English the dominant language...by the [English] characters being spoken and the English that would write along the side or underneath the spoken Spanish words. So, it was out of complete respect to give the dignity where dignity is earned and deserved to be given."

The full Steven Spielberg interview can be read on the Digital Spy website.