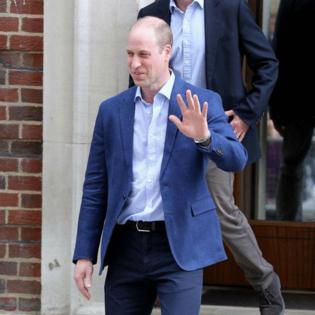 The Duke of Cambridge - who has Princes George, eight, and Louis, three, and Princess Charlotte, six, with his wife Catherine, Duchess of Cambridge - has revealed he's a massive fan of the heavy rock legends and finds it "hard" not to "head-bang" along to the stomping anthem.

Speaking on the Apple Fitness+ podcast' Time to Walk', he said: "There's nothing better on a Monday morning, when you're bleary-eyed after the weekend and trying to get back into the grind of the week.

"It wakes you up, puts you in the best mood possible, and you feel like you can take on anything and anyone.

"I'd imagine you're going to walk quite fast listening to it, maybe with a skip in your step, with the head-banging.

"It's a difficult song not to dance to or to nod along to."

The future king - who is second in line to the British throne - also revealed that his young daughter loves Shakira and even copies the 'Hips Don't Lie' singer's hip-busting moves and tries and gets her younger brother involved.

He spilled: "One of the songs that the children are loving at the moment is Shakira's 'Waka Waka'.

"There's a lot of hip movements going on, a lot of dressing up.

"Charlotte, particularly, is running around the kitchen in her dresses and ballet stuff.

"She goes completely crazy with Louis following her around trying to do the same. It's a really happy moment where the children just enjoy dancing, messing around, and singing."

What's more, William and Catherine's oldest boy get into fights with his sister over what music they play at their family home, Amner Hall, in Norfolk.

He said: "I have to prioritise so George gets his go, then Charlotte gets her go. Such is the clamour for the music."