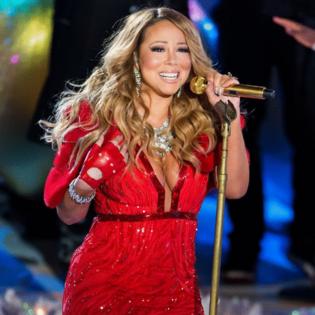 Mariah Carey says her daughter is too pampered to play her in a biopic.

Monroe Cannon, 10, wants to play her mother in an upcoming project but Mariah thinks the youngster would not be able to relate to her tough childhood.

According to The Sun newspaper's Bizarre column, Mariah - who shares Monroe and twin brother Moroccan with former husband Nick Cannon - said: "Monroe wants to do it but honestly, it's going to come down to the director.

"To do a role of that magnitude, I don't know where she'd draw on to find the sadness because they've got a pretty good life, my kids."

Mariah recently revealed that she was is working with Lee Daniels to turn her 2020 memoir 'The Meaning of Mariah Carey' into a series.

She said: "First things first I wrote my memoir last year, 'The Meaning of Mariah Carey', [and] it's only relevant to this conversation because the paperback is now out.

"There was a discussion whether my little-girl picture could be on the cover and nobody wanted it, they wanted the modern day thing.

"Now the paperback is finally the representation of myself that I wanted… the little girl that nobody knew or understood because [I'm] Black and biracial.

"I would rather do [an adaptation]; that's why we wrote the book first."

She joked that Daniels is "probably going to hear this and kill me," before confirming they were working on an eight-part series.

She said, "I need it to be gritty, grimy and beautiful, spectacular and real!"