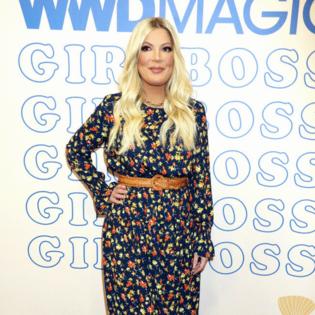 The former 'Beverly Hills, 90210' star has admitted her 20-year-old implants had "expired", and she wants her breasts to have a "more conservative" look this time round.

She said: "[The consultant] was showing me two different kinds and he was like 'Do you want higher profile or moderate profile?' I wanted to be able to dress sexy but I want to be able to dress conservative and not be like, all boobs. [So I'm getting] moderate."

The actress - who has kids Beau, four, Finn, nine, Hattie, 10, Stella, 13 and Liam, 14, with husband Dean McDermott - was surprised to learn in the consultation that her breasts were bigger than she initially thought, but put this down to becoming a mother and revealed she is opting for implants that will "fill out" more when she goes for the surgery in February 2022.

Speaking on SiriusXM's 'Jeff Lewis Live', she added: "I told him I was a 32C and he said 'Those are Ds!', but I protested. I said, 'Absolutely not!' and then I was like 'Well, I have had kids and gained weight. So okay, fine'.

"The sizing I'm getting is a little bit bigger but it won't look it because [it will be] wider. So they will actually look smaller but will fill out more."

Tori's decision to go back under the knife comes after uncertainty surrounding her marriage to reality star Dean, as he was noticeably missing from the annual family Christmas card photo.

At the time, she explained that Dean was "filming his new feature film in Canada" to justify his absence, but she has now fuelled further speculation over her marriage when discussing her holiday plans.

Asked by host Jeff Lewis whether she would be buying Dean a gift for Christmas, she responded: "Yes, of course. The kids are getting him something."

And when he wondered if the children would be spending their own money on the present, she added: "No, I'm contributing."