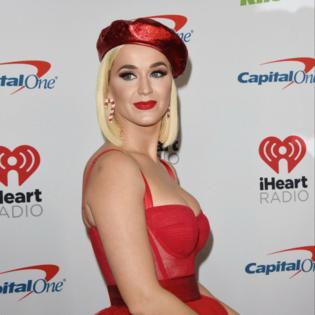 The 'Firework' hitmaker loves how her new show 'Katy Perry:PLAY' at the Resorts World Casino will allow her to be "artistic" and also get to be there for her 15-month-old daughter, Daisy Dove, whom she has with fiance Orlando Bloom.

The 37-year-old pop superstar told Las Vegas magazine: "I really wanted to be able to strike more of a balance - to have a child and take her to preschool - but also be artistic and play with that energy."

The 'I Kissed A Girl' singer shared how having sweet "moments" as a family are "so important" to her.

Katy said: "Orlando and I just did a hike with our daughter. We went to look at some ducks and turtles because it's so important for me to have those moments every single day, especially when I'm working from 2pm to 9pm."

The 'American Idol' judge gave a teaser about her family-friendly Sin City "visual feast" and its retro pop culture references.

She said: "I like to bring a visual feast, and this is a set-in-the-'60s, 'Honey, I Shrunk the Kids' movie on mushrooms.

"It is a dance party through and through but I also aim to make it a show that anyone can come to, from ages six to 80, and I really pride myself on that."

Her residency - which begins on December 29 - will be the first of its kind to incorporate NFTs, a blockchain method of dealing digital art.

Previous artists with residencies in the Nevada city include Celine Dion, Britney Spears, and Gwen Stefani.

Katy said: "The first thing we're going to be auctioning off with the NFT is the craziest thing I've ever done. We'll be creating something unique in the NFT space every single night; they will all be original."

The 'Teenage Dreams' star admitted that using Non Fungible Tokens felt "pioneering and trailblazing", as not many people understand them.

She said: "The first thing we're going to be auctioning off with the NFT is the craziest thing I've ever done. We'll be creating something unique in the NFT space every single night; they will all be original. I think some people don't understand how NFTs work or what their value is so it does feel like we are pioneering and trailblazing in this way. Imagine if I put my finger up during the song 'Firework' and you wanted to own that moment--now you could."