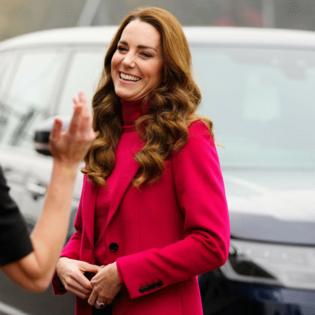 The Duchess of Cambridge's Christmas carol service is set to air on ITV on December 8.

The 39-year-old royal is set to bring together the nation to honour those who have helped their communities amid the global pandemic with the Yuletide broadcast from Westminster Abbey next week.

The celebration will pay tribute to the "individuals and organisations across the nation who have stepped up to support their communities through the pandemic".

Catherine - who has Princes George, eight, and Louis, three, and Princess Charlotte, six, with husband Prince William - has joined forces with the Royal Foundation, Westminster Abbey and BBC Studios Events Productions on the festive special.

There will be a host of special guests, including teachers, emergency responders, and members of the armed forces.

Alongside an official invite to the gathering posted on The Duke and Duchess of Cambridge's Instagram page, the couple announced: "This Christmas we are celebrating the incredible work of individuals and organisations across the nation who go above and beyond to support their communities.

"Next week, The Duchess will host a Christmas carol service at Westminster Abbey, supported by The Royal Foundation, bringing many of those inspirational people together.

"The service, which will be broadcast in December, will look back on the last eighteen months, to think not only of the unprecedented challenges that we have all faced as we continue to navigate the COVID-19 pandemic, but also to remember the positives: people and organisations pulling together in their communities, the small acts of kindness across different demographics and generations, and the unsung heroes who stepped up to help others."

She loves her festive decorations to be "immaculate" but she can't resist breaking away from her seasonal theme to add some extra touches that she knows will make her grandchildren "laugh".

Giving her verdict on a pair of Nordic gnomes on her Party Pieces website, Carole - who is also grandmother to daughter Pippa and her husband James Matthews' children Grace, eight, and three-year-old Arthur - wrote: "I'm going to need a few of these cheeky chaps this December, to hide around the house and make my grandchildren laugh. As much as I love immaculate decorations, we can't be too serious at Christmas!"

The carols kick off from 5pm.