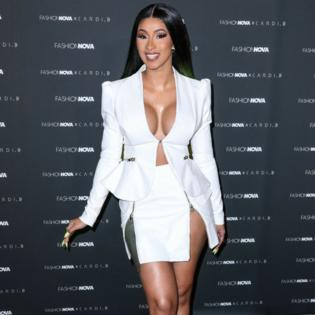 Cardi B's new line of whipped cream sold out within minutes of going on sale.

The 29-year-old rap star's Whipshots - a vodka-infused whipped cream - went on sale on Wednesday (12.01.21), and the cans were all sold within minutes.

The 'WAP' hitmaker - who has previously called the brand "Cardi in a can" - initially wrote on Twitter: "Whipshots are here yall!!! - Get yours today 12pm est at http://whipshots.com - we got new drops every day because I want errbody to get theirs. Yoou never had whipped cream like this before I promise (sic)"

And Cardi later wrote on the micro-blogging platform: "Wowowow whipshots sold out already!! We got more tomorrow though - http://whipshots.com (sic)"

Cardi announced plans to launch Whipshots earlier this year, when she claimed that the brand "matches [her] style".

She said at the time: "I'm so excited to join Starco Brands with this incredible opportunity. Whipshots matches my style - over the top, sexy, unique. Together we're completely innovating whipped cream and giving it an extra pop. Whipshots is Cardi in a can."

Meanwhile, Cardi recently collaborated with Lizzo on their hit single 'Rumors', and the singer subsequently hailed the rap star as a game-changer for female artists.

Lizzo, 33, relished the experience of teaming up with Cardi, who worked as a stripper before finding fame and success in the music business.

Asked what she loves about the rapper, Lizzo explained: "Cardi B is the ultimate. She, to me, has always done it right.

"Everything that she said, every way that she's reacted because you know why? It's because she was true to herself the whole time. She's a ground breaker. You can't deny her ability. She's a superstar."

Lizzo thinks the rapper has actually changed the landscape for female artists like herself.

The singer said: "She has changed the game forever for a lot of us, a lot of women. I don't even think she realizes she's doing it because it's just like, I'm trying to just be successful. I'm trying to get this money. I want to live a happy life.

"She just follows her heart. That's what I love about her."