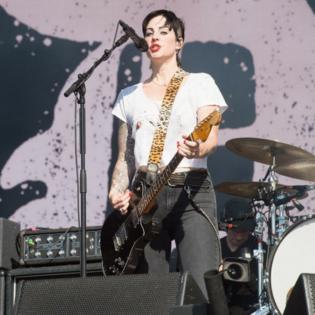 Brody Dalle has been sentenced to 60 hours of community service and fined $1,000.

The Distillers frontwoman has been ordered to carry out unpaid work for contempt of court in her lengthy custody battle with former partner Josh Homme.

On November 19, the 42-year-old musician was convicted of one count of contempt for "willfully" refusing to hand over her five-year-old son, Wolf, to the Queens of the Stone Age rocker as agreed in September.

Homme and his lawyers had requested a penalty of five days in jail if she didn't finish 120 hours of community labour, but Judge Lawrence Riff was much more lenient.

Speaking to Rolling Stone after she appeared at Los Angeles County Superior on Tuesday (30.11.21), Dalle said: "I'm relieved by the court's decision. I don't believe anyone should go to jail or pick up trash for protecting her children.

"As a mother, I will always put my children first and protect them at all costs."

Dalle was acquitted for the same thing regarding their 10-year-old boy Orrin, while their 15-year-old daughter, Camille, was granted a temporary restraining order against her father in September, and was not included.

She then claimed that her ex had "testified to calling me a ****, a cow, and telling me to, 'F*** off forever.' Does this sound like a person who wants to do the right thing by our children? He has taken no responsibility for his words and actions and the effect that they have had on our children."

Homme claimed that he is "willing to take responsibility for things that I do."