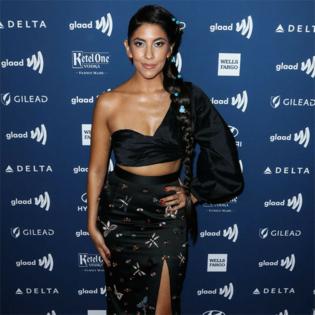 Reflecting on her experience of watching one particular episode of 'Sex and the City', Stephanie explained: "It sucked watching one of my favourite shows talk about bisexuality in this super s***** way for jokes. It felt yuck."

Stephanie thinks the portrayals are often wildly inaccurate and, ultimately, unhelpful for bisexual people like herself.

She told The Independent: "We're so often presented to be like these super-promiscuous beings. Like we're using our sexuality to manipulate people.

Stephanie believes that her personal situation is complicated by her Latin background.

The 'Brooklyn Nine-Nine' star - who has a Colombian father and a Bolivian mother - explained: "I'm in that intersection of Latinx, woman and queer, and there's a lot of cultural norms you feel pressured to complete, like get married, have kids...

"As a bisexual woman, people think like 'Oh you could still fall in love with a man and do all those things.' People think it's a phase or that it's not even real."

Stephanie has enjoyed success on stage and on screen during her career.

However, her parents were initially unconvinced about her career choices - particularly as her family had no links to the entertainment industry.

She said: "It's very risky pursuing the arts, especially if you don't know anyone who has done it before. It's really unknown.

"I didn't know how people got on TV or in a play. There was no one in my family who could tell me how to get an agent."