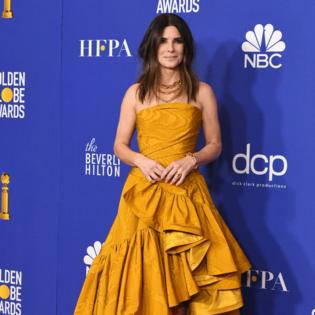 The 57-year-old actress has two adopted African-American children - Louis, 11, and Laila, nine - and Sandra admits that having matching skin might have made their lives "easier".

In a 'Red Table Talk' interview, Sandra said: "To say that I wished our skins matched ... sometimes I do.

"Because then it would be easier on how people approach us. And I have the same feelings as a woman with brown skin, and it being her babies. Or a white woman with white babies."

Willow Smith - the 21-year-old daughter of Will and Jada Pinkett Smith - then said: "It's the mother-child dynamic. There is no color. We don't have to put a color on..."

But, Sandra added: "Maybe one day that will go away. Maybe one day we will be able to see with different eyes."

Sandra previously discussed her attitude towards motherhood at the 2019 MTV Movie & TV Awards.

The Hollywood star - who won a gong for her performance in the Netflix hit 'Bird Box' - said during a speech: "I wanted you to see what being a family looks like, that sometimes you're born into a family, sometimes you need to go find it, sometimes it finds you.

"But no matter what, you are my first thought in the morning, you are my last thought at night. I was put on this earth to protect you, you are my world, I love you so much, and I will move mountains to make sure that you are safe."