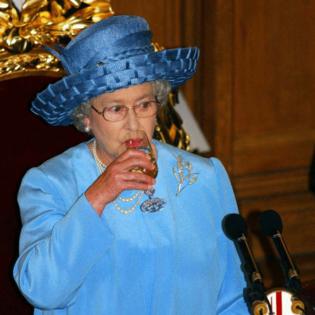 Royal sommelier Demetri Walters shared: "It's bad for her joints, and she can't drink too much when she's doing all these royal engagements - it's not a job you can drink in."

Despite this, the Queen remains fond of an occasional drink.

Demetri - who has previously worked for the royal wine supplier Berry Brostold - told the Daily Mail newspaper: "I choose for the Queen, but she's quite exacting, as she doesn't drink much wine at the moment."

The Queen recently awarded a Royal Warrant to her favourite drink.

The monarch has been advised to stop drinking Dubonnet, but she awarded the beverage a coveted Royal Warrant, meaning bottles can carry a label that says, "By appointment to HM the Queen".

Simon de Beauregard, a director of parent company Pernod Ricard, said: "We are delighted Her Majesty enjoys our beautiful brand and humbled to have received a Royal Warrant."

The bottles are set to carry the new, prestigious labels from next year.

The Queen is a long-time fan of the drink and although it's fallen out of fashion over recent decades, Simon noted that the beverage has been making a steady comeback amid the coronavirus pandemic.

He explained: "The growth is partly due to lockdown, but we believe it is more to do with consumers looking for a lower-alcohol drink.

"It is 14 percent [alcohol by volume] compared to about 40 percent in gin and vodka, and it has also become fashionable with the young to use in Negroni cocktails."