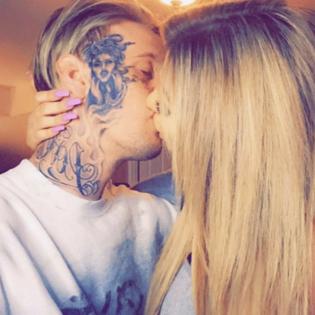 Aaron Carter has reportedly split from his fiancée Melanie Martin, days after they became parents.

The 'Crazy Little Party Girl' singer and his partner only welcomed their son, Prince Lyric, into the world last week, and now he has claimed they have gone their separate ways in an outburst, after she "deceived" him by "communicating" with his arch-nemesis twin sister, Angel.

The 33-year-old star has accused his family of trying to "put me in prison" and get him a conservatorship.

According to TMZ, Aaron said on Instagram: "There has been a very big lie and my sister communicating w my ex fiancée ruined everything considering she knew what angel tried to do to me in court.

"Thanks angel you ruined my family. God bless.

"I have the most conniving deceiving family and Melanie has been lying to me the whole time, communicating with my twin sister and the family members who tried to put me in prison and who tried to get a conservatorship on me in court.

"I'm in shocked this is horrible. (sic)"

According to the news outlet, Aaron has claimed Melanie is taking their son with her to Las Vegas from California, with a friend.

Sharing a photo of the newborn, Aaron had posted on Instagram: "Emergency C Section after 13 hours of labor but my [fiancée] is in great health thank you lord and the incredibly sweet loving staff here.

"Prince is precious I love you son. Your mommy loves you as I drop tears on the phone. This is me cutting his umbilical cord my precious family #TheCarters@missmelaniemartin I'm so proud of you hunny you did it I Love you with all my heart my beautiful blessings from god (sic)"

And he revealed earlier this month that Melanie was pregnant and due to give birth on November 18, but at the time, the couple were expecting the baby to come early.

And Aaron explained the choice of moniker for their son was in honour of his late friend, Michael Jackson, because the 'Thriller' singer, who died in 2009, used to call him the Prince of Pop, in a reference to his own King of Pop nickname.

The pair were "nervous but thrilled" about becoming parents.

However, Aaron remains estranged from his mother and famous brother Nick Carter, though he insisted he has tried to make amends with them both.

The pair got engaged last summer.