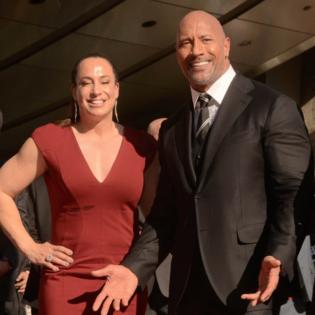 Dwayne 'The Rock' Johnson has wished his ex-wife, Dany Garcia, a happy birthday.

The 'Red Notice' star posted an Instagram video praising the film's producer and his business partner - who he was married to between 1997 and 2007, and has daughter Simone, 20, with - and the "long road" they have travelled together.

The 49-year-old actor wrote on her 53rd birthday: "What a long road of business and enterprise we have built. HAPPIEST OF BIRTHDAYs @danygarciaco."

The 'Fighting With My Family' star enthused about the "privilege" of having Dany in his life since he was a teenager and heaped praise on how "driven" she was.

He said: "I've had the privilege of knowing Dany since I was 18yrs old. She's always been driven (Chairwoman & founder of multiple companies). Always had a strong financial acumen (starting from her early Merrill Lynch days). And ALWAYS had an extraordinary prescience and macro view of how to architect global success with my enterprises."

The former WWE wrestler - who is known for his wrestling name The Rock - also thanked Dany for taking a chance on him when he was a "punk kid" in his adolescence.

Dwayne said: "Dany identified very early - even when I was a punk kid in my teens - the unique relationship and connection I've been lucky to have with people over the years. Her new position of Global Strategic Advisor to Seven Bucks Companies (the holding company that houses all my businesses) is one of the smartest decisions I've ever made."

The 'Baywatch' actor - who married current spouse Lauren Hashian, the mother of his two daughters Jasmine, five, and Tiana, three, in 2019 - concluded with the quip: "That's saying a lot considering I became famous for wearing a fanny pack.

Dany - who married to Dave Rienzi in 2014 - commented on the message: "The kindest of words @therock.

The former husband and wife's business ventures started with them joining forces with Seven Bucks Productions and developed when they purchased the XFL - an American Football league - making her CEO and the first female sports league owner.