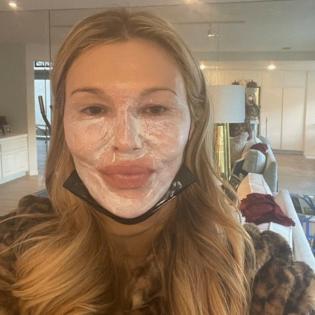 Brandi Glanville has undergone a snow peel to help ease the burns on her face.

The 49-year-old reality star revealed earlier this year she had suffered second degree burns after using a psoriasis lamp in December for too long and she's now explained she's had the treatment - which "utilises an innovative peeling technique that simultaneously removes dead skin cells and rejuvenates skin" - to help reduce the scarring.

Sharing a selfie with a product on her face over the weekend, the former 'Real Housewives of Beverly Hills' star tweeted: "I had a beautiful Thanksgiving with my modern family.

"I didn't take any photos because I'm healing from a snow peel my face is swollen my left eyelid barely works but hopefully it will help with my scars from Covid and my burns.(sic)"

Asked how she had been scarred by COVID-19, she clarified: "Never had Covid. Just meant in the earlier months of pandemic I did a light treatment on my face for my psoriasis and I f***** up the timing on it and caused burns and scarring on my face. Hoping this peel helps (sic)"

In March, the former 'Real Housewives' star revealed she'd been struggling with pain for months after suffering second degree burns "all over [her] face" in December following mishap with a light treatment she was using to ease skin condition psoriasis.

Following criticism of her appearance on an Instagram Live, Brandi shared a close-up photo of part of her face without make-up on Twitter and wrote: "So this happened to me in December 2nd degree burns all over my face from an accident with a psoriasis light I am still healing.(sic)"

A fan asked how she was recovering and she added: ""I'm OK but you know it happened in December I'm still swollen and having people attack my looks just makes me feel like I never wanna leave my house and I just want to cry.

Brandi explained her injuries were sustained when she misunderstood the instructions she'd received from her doctor.

She wrote: "It was an accident obviously my doctor told me to hold the light over my face for 17.3 what I thought were minutes but it was seconds.

"Completely my fault. It was suppose to help the psoriasis that was overtaking my face from stress."