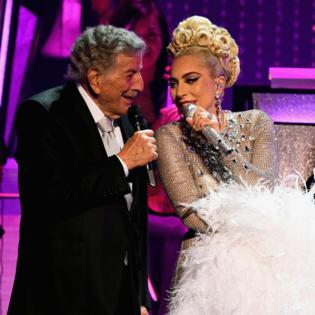 Lady Gaga has heaped praise on Tony Bennett's "remarkable wife" Susan for "the love" she has for her husband.

The 'House of Gucci' star made the comment after her and Tony's CBS concert special 'One Last Time' aired in the US, and the 35-year-old Oscar-winner admitted she will "cry about tonight forever".

Alongside a picture from the show, Gaga wrote on Instagram: "The real 'Lady' of the hour is Susan Benedetto, Tony's remarkable wife. Thank you Susan for how you love @itstonybennett I love you and Tony and the whole family so much. I'll cry about tonight forever."

Tony and Gaga recently released their second joint LP, 'Love For Sale' - the follow-up to 2014's 'Cheek to Cheek' - which marked his last ever album.

Susan is caring for the 95-year-old Jazz legend, who is battling Alzheimer's disease but has no idea he has the progressive neurological condition, which causes memory loss.

Meanwhile, Gaga recently shared her delight at Tony understanding her every word when she told him the news they are up for six Grammys.

The 'Stupid Love' hitmaker, 35, and the music legend have been showered with nods for their acclaimed duets album, including the prestigious Album of the Year prize.

And the 'A Star Is Born' star was left "utterly speechless" after finding out they are up for several accolades next year.

The duo are also in contention for Record of the Year for 'I Get a Kick Out of You', and best Pop Duo/Group Performance, Traditional Pop Vocal Album, Music Video, and Engineered Album Non-Classical.

Tony became the oldest artist in history to be nominated in the general categories.