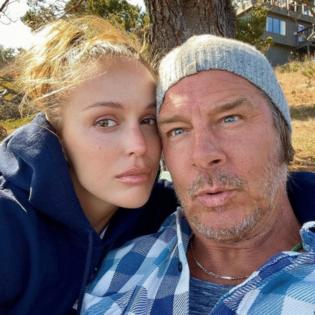 PEOPLE reported that the 57-year-old TV presenter - who is known for previously hosting ABC series 'Extreme Makeover: Home Edition' - and his now-wife walked down the aisle on the grounds of their work-in-progress property in Savannah, Georgia, with less than 10 guests in attendance.

And the groom took to Instagram on Sunday (28.11.21) to share a stunning professional snap of the happy couple posing in front of their wedding car, a cabriolet.

Ty captioned the picture: "We did it."

News of their engagement came in the summer.

Taking to Instagram in July, he shared a picture of the 34-year-old social media manager's engagement ring, and he added the caption: "It's the "yes" for me… (sic)"

A representative for Ty shared that he asked Kellee to marry him over a morning coffee on the dock of his house in Palm Coast, Florida.

The couple had been in touch through mutual friends since first meeting in 2010, but they grew closer last year when they decided to quarantine together amid the coronavirus pandemic.

Ty - who previously dated Andrea Bock - admitted he didn't ever think he would get married, but the former 'Trading Spaces' star was "glad" he waited for Kellee because he just feels "happy" being around her.

He told the publication: "I have admired Kellee from afar for years.

"She's a beautiful person inside and out.

"Luckily our paths finally crossed at the right time.

"It's one of those things where you just feel happy being around a person.

"I never thought I would get married, but she changed that.

"Glad I waited for the one."

The pair had just bought their new home at the time and were renovating the abode.

His spokesperson added that the couple were "thrilled" to be engaged and are looking forward to the future.