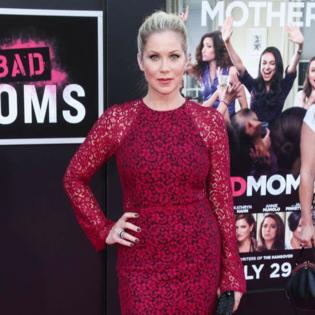 The Hollywood actress was diagnosed with the autoimmune disease MS - which affects the central nervous system - earlier this year, and on her milestone birthday, the former child star admitted it was "a hard one" as she encouraged others suffering to "find the strength to lift our heads up", even on the hard days.

Christina, whose birthday was on Thursday (25.11.21), tweeted yesterday: "Yup. I turned 50 today. And I have MS. It's been a hard one. Sending so much love to all of you this day. Many are hurting today, and I am thinking of you. May we find that strength to lift our heads up. Mine currently is on my pillow. But I try."

Christina revealed in August she had been diagnosed with MS a few months beforehand.

She wrote: "Hi friends. A few months ago I was diagnosed with MS. It's been a strange journey. But I have been so supported by people that I know who also have this condition. It's been a tough road. But as we all know, the road keeps going. Unless some a****** blocks it."

And several of her co-stars have praised her, including James Marsden.

The 48-year-old actor admitted his 'Dead to Me' co-star is a "compassionate, wonderful human being" who will "fight through" her health battle.

He said: "That is her character. It is just who she is. Nothing is going to keep her down and she is going to battle and fight through anything and I admire her as a person.

"Just as a compassionate, wonderful human being who is fun to work with but is also, in addition to that, anything that life will throw at her, she will figure out a way to not let it keep her down. And she is doing exactly that and it is really, really inspiring to see."

But James admitted he is not shocked about Christina's resilience, because that is how she is.

He added: "Honestly, that is no surprise to me because that's who she is as a character and as a human being."

J.K. Simmons was reluctant to star in 'Being the Ricardos'.

The 67-year-old actor plays William Frawley in Aaron Sorkin's movie - which delves into the relationship between the 'I Love Lucy' stars Lucille Ball (Nicole ...Read More

The 44-year-old actress portrays the late televangelist in the new movie 'The Eyes of Tammy Faye' and believes it the way to atone ...Read More

Tove Lo would like to see Damon Albarn and Taylor Swift mend their rift by collaborating.

The Swedish pop star - who has co-written hits for the likes of Dua Lipa, Lorde and Ellie Goulding - has spoken out in support of ...Read More

Chris Brown is being sued for $20 million by a woman accusing him of rape.

The 32-year-old singer has been hit with a lawsuit by an anonymous woman, who has claimed he drugged and raped her on December 30, 2020.

President Joe Biden, Drew Barrymore and Goldie Hawn will be among those to celebrate the life of the late Betty White in a TV special.

The former 'Lost' actress was among the demonstrators in Washington, D.C., and explained she attended the controversial protest...Read More