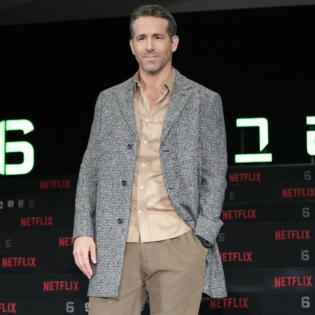 The 'Deadpool' star took to Instagram to share a video of his reaction to former Barenaked Ladies musician Steve Page paying tribute to the 45-year-old actor in song form.

He wrote alongside the clip: "Last night Canada honoured me with a Governor General's Award and this video. I'm not crying. It's just maple syrup.

"Also, it's worth noting @stevenpage is not only a friend but an absolute legend.

"He wasted this perfectly awesome song on me.

"Thank you to Her Excellency, The Right Honourable @governorgeneralcanada, Mary Simon.

"Thank you to the @nac.cna for keeping the performing arts alive and well throughout Canada and being a champion for voices which have been historically silenced or overlooked. #GGAward (sic)"

The Govenor General's Award is "a collection of annual awards presented by the Governor General of Canada, recognising distinction in numerous academic, artistic, and social fields."

The 'Free Guy' star is currently on a break from acting in order to spend as much time as possible with his daughters.

Ryan is taking a career hiatus until "at least the summer of 2022", and has said his main goal during his time off is to spent some quality time with his three girls - James, six, Inez, five, and Betty, two - whom he has with his wife, Blake Lively.

He said: "You can't say you're doing that without recognising the obscene privilege it is to be able to do that.

"Part of it is to allow Blake to do some of the things that she wants to do and get to play in her own sandbox. And the other part is purely selfish. It's just that I don't want to miss this time. You don't get this time back. And my kids are in school now, so they can't travel with me to location. I have to be there. So it's important and I'm super lucky I get to do it."

Ryan insisted he's looking forward to the well-deserved time off, even though his house is "quite literally a circus all the time" with three youngsters running around.

"[But the main thing is that I'm] there for my kids in the morning and night and getting up with them and putting them to bed at night. Those are not things that should feel special in any way, shape, or form."

Addison Rae is still "figuring out" her style.

The 21-year-old star admits to agonising about her appearance and what fans think of her - but she's still trying to develop her personal style.

Cardi B thinks fame is "boring".

The 29-year-old rap star - who is one of the world's best-selling music artists - admits that being famous isn't as exciting as people imagine.

The 'WAP' hitmaker - who has Kulture, three...Read More

The 60-year-old comedian hosted the awards show five times over a decade and Ricky relished the opportunity to mock Hollywood's rich and famous.