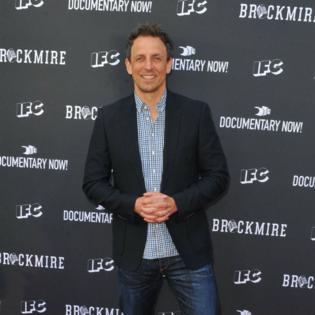 The 'Late Night with Seth Meyers' host announced during Thursday's (25.11.21) episode of his talk show that he and his wife Alexi Ashe secretly welcomed their third child, a daughter named Adelaide, in mid-September.

Seth was joined by his parents, Hillary and Larry Meyers, as well as his brother, Josh Meyers, on the show for a special Thanksgiving segment, where he showed a video in which his other two children - sons Ashe, five, and Axel, three - dressed up in matching turkey costumes.

And in the clip, the two boys made the big reveal by showing their infant sister in a matching outfit.

Seth said: "We had another one, you guys!"

He then revealed Alexi, 38, had delivered their latest addition "10 weeks ago".

Seth's mother then said the new arrival had been named Adelaide after Seth's maternal grandmother.

Hillary added: "I knew, knowing Seth and Alexi, it had to start with an A, it had to be a cool name and I know what family means to all of them, so I thought I pretty much had it and [guessed], but I didn't know and I didn't want to ask … [When I found out], I burst into tears."

Seth also asked his father what name he would have liked if the couple had welcomed another boy, to which he said he has a profound love for the name Albert.

Seth and Alexi wed back in 2013 and welcomed their first son three years later in 2016, before their second child arrived in 2018.