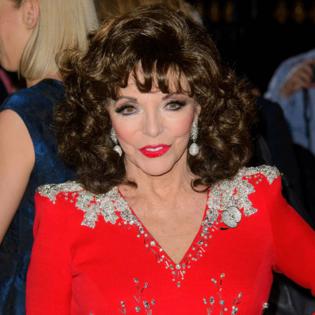 Dame Joan Collins is "lucky" to be getting older in good health and surrounded by her loved ones, but admits that being "very wealthy" helps in later life.

The former 'Dynasty' star is fighting the "perception" that becoming a senior citizen has to be limiting, an attitude that she describes as "outdated", but she accepts she has great advantages when it comes to ageing as she is more than financially secure thanks to her incredible eight-decade spanning showbiz career.

The 88-year-old actress told the US edition of Closer magazine: "There's a perception about getting older that's outdated. People are living longer and living healthier. I'm lucky in that I'm very healthy and have all my faculties, a great family and great friends."

Included in Joan's family are her three children, artist Alexander Newley, 56, writer-and-producer Tara Newley, 58, whom she had with her second husband Anthony Newley and Katyana Kass, 49, from her marriage to third spouse Ronald Cass.

Her fifth and current husband Percy Gibson - who she wed in 2002 - also keeps her youthful, as he, at 56, is 32 years younger than his wife.

Joan - who was also previously wed to first spouse Maxwell Reed and fourth hubby Peter Holm - insists she could not "bear" to be romantically involved with anyone close to her in years.

The Hollywood icon mused: "I couldn't bear to be married to someone my own age."

Speaking about Percy, she described him as "the best".

The 'American Horror Story: Apocalypse' star considers herself to be a staunch feminist, she previously revealed that she battled for equal pay with her 'Dynasty' co-star John Forsythe when she played Alexis Carrington in the hit 1980s TV series.

Revealing her opinion that the sexes are equal, she said: "I've always believed in equality.

"Women can do whatever men do, and they have the right to do so. The only possible area where women aren't equal is physical strength. That's why I'll let somebody carry my bags. And, well, there's a lot of bags."