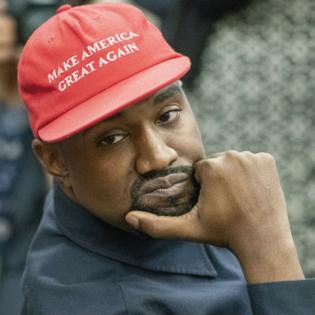 Kanye West "embarrassed" Kim Kardashian West with his failed presidential bid and his political views were "hard" on his marriage.

The 44-year-old rapper ran for office as an independent candidate in 2020 but only appeared on the presidential ballot in 12 of the 50 states, and in his one and only press conference for his campaign, he admitted he and the 'Keeping Up With the Kardashians' star had considered an abortion when she fell pregnant with their first child, eight-year-old daughter North.

And reflecting on the period, the 'Stronger' hitmaker admitted Kim "did not like" him affiliating himself with former President Donald Trump by wearing a red 'MAGA' cap and he had made them a "target" with his outspoken views.

He said in a 'Thanksgiving prayer' shared online on Thursday (25.11.21): "Let's go with politics here. Good Lord, my wife did not like me wearing the red hat. Being a good wife, [Kim] wanted to protect me and our family.

"I made me and our family a target by not aligning with Hollywood's political stance and that was hard for our marriage.

"Then I ran for president without proper preparation and no allies on either side.

"I embarrassed my wife in the way that I presented information about our family during the one and only, thank God, press conference.

"All my dad had to say afterwards was, 'Write your speech next time son.' "

Kanye was rumoured to have lost more than $14 million on his disastrous campaign and admitted he had "spent money like crazy".

He told listeners: "It's the craziest thing I've done and I've done a lot of crazy things."