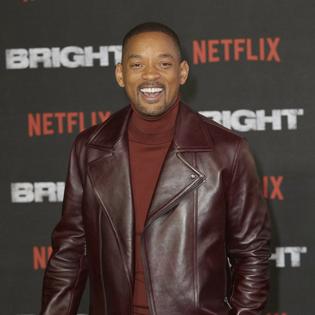 Will Smith has asked Lin-Manuel Miranda to "help" him with a one-man stage show.

The 'King Richard' actor couldn't resist asking the 'Hamilton' creator to give him a hand on a project he's wanted to make "for years" as he hailed the actor and director as "the one of one in this business".

With both stars appearing on Friday's (11.26.21) episode of 'The Graham Norton Show', he said: "This is probably a terrible thing to ask at this time, but I want to do a one-man show and I would love you to help me do it.

"I have had it in my mind for years and I think you are the one of one in this business."

Lin-Manuel - who was on the programme via video link - seemed shocked but didn't turn down the offer.

He replied: "You heard it here first!"

There's not likely to be anything too racy in the production, as Will admitted elsewhere during the interview that he hates doing "sex scenes".

He explained: "Sex scenes are the worst part of acting - when you watch it in a movie there is music and wine but on set there is some big dude holding the microphone, chewing and watching you."

Whether or not Lin-Manuel does get on board with Will's show, he's already got experience after making his directorial debut with new musical drama 'Tick, Tick... Boom!'

Opening up on the film, he explained: "It's about Jonathan Larsen and an amazing portrait of an artist.

"He would go on to write 'RENT', which, when I saw it as young man gave me permission to write musicals. When I saw 'Tick, Tick... Boom!' it clarified that this was my calling."

Regarding Andrew Garfield in the lead role, he added: "I didn't know if he could sing or not. I saw him on stage at The National and left feeling that he could do anything - he had all the superpowers and I hoped he could sing.

"He told me he had always wanted to, so he trained. We gave him all the resources and he was like a brand-new instrument coming into its power over the course of a year."