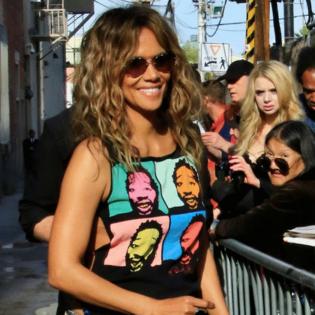 Halle Berry made her directional debut to make her kids "proud".

The 55-year-old Hollywood star has helmed the sports drama flick, 'Bruised', where she also plays disgraced MMA fighter, Jackie Justice, who decides to return for an unsanctioned bout.

And the mother-of-two - who has Nahla, 13, and Maceo, eight, from previous relationships - has explained that she was inspired to step behind the camera by her two young children, who have "changed my game since the minute they got here."

Halle insisted she has to "keep going", and by stepping outside of her comfort zone, she is able to "keep discovering more facets" of herself.

The 'Catwoman' star explained: "There's nothing I wouldn't do for my children, and what I think Jackie Justice learned is that we will go really far for our children.

"There's things that I do that I would never do for myself, but I do for my children and that's how motherhood has changed me.

"And having my children now is the reason I'm even directing because I have to keep going.

"I have to keep discovering more facets of who I am.

"I have to keep trying to make them proud. I have to keep modelling for them someone who's alive and very involved in their career and as a woman, as a Black woman.

"I need to model for them what that looks like, so they've changed my game since the minute they got here."

Shilpa Shetty has been cleared of "obscenity" charges nearly 15 years after she was kissed on stage by Richard Gere.

The Bollywood actress appeared with the 'Pretty Woman' star at an AIDS awareness event in Mumbai back in...Read More

Sydney Sweeney refused to do some nude scenes in 'Euphoria'.

The 24-year-old actress stars as Cassie Howard - a character haunted by her sexual past - in the HBO drama series alongside Zendaya, and she admitted that ...Read More

A 102-year-old magician has been honoured with an MBE by Prince William.

Henry Lewis received the honour from the Duke of Cambridge at an investiture ceremony at Windsor Castle on Tuesday (25.01.22) and celebrated by ...Read More

The 43-year-old star dressed as a nun to announce the launch of her new page on the adult subscription site, and the former glamour model, who is charging fans $14.99 a month to unlock her...Read More