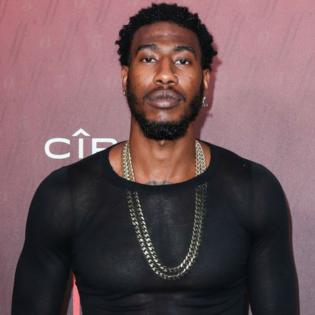 Iman Shumpert's parents were unable to be at the 'Dancing With the Stars' finale after his dad tested positive for COVID-19.

The NBA star and his partner Daniella Karagach scooped the Mirrorball trophy on Monday (22.11.21) and though his mother and father had flown out to Los Angeles to be in the studio for the finale, they were ultimately unable to attend and so the 31-year-old sportsman can't wait for them to see his prize.

He said: "[My mom] watches this show so much, loves this show, always talks about the outfits, the production, what it means to her...

"[They] weren't able to come in, because my father tested positive for COVID.

"I needed that moment to confirm to myself that they was happy and they was proud. I just can't wait so they can share this actual feeling and touch the trophy."

Iman - who is married to Teyana Taylor - is the first NBA star to win the show and hopes he made his "family" within the sport proud.

He told E! News: "It means a lot. I think with the NBA, we're a family, a fraternity at the end of the day. And any time I got to put that hat on to represent them, I try and do it the right way. I hope they was watching, supporting.

"I hope we did it justice. I love my NBA family."

Iman and Daniella beat Amanda Kloots and Alan Bersten, and JoJo Siwa and Jenna Johnson to win the season 30 title, but both losing couples couldn't have been happier for the winners.

Amanda wrote on Instagram: "Watching you two dance last night brought everyone to their feet! I cannot imagine a more deserving couple to hold that mirrorball trophy! To all the [finalists], it was an awesome night sharing the dance floor with you!(sic)"

And pro dancer Jenna said: "Iman, for some reason, has been like our big brother in this whole competition, so if there was anyone who we wanted to win, it was Iman and Daniella."