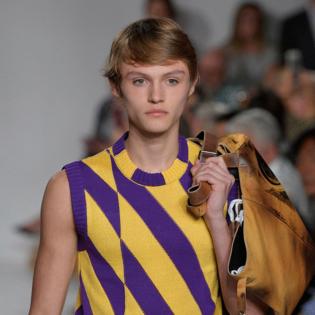 Mingus Reedus was joined by his lawyer, Isabelle Kirshner, for a hearing in Manhattan in relation to the misdemeanour assault charge he was hit with in September for allegedly punching a woman in the face.

The 22-year-old model left the court via a back door and declined to comment on the charges, but he will next appear in court on 5 January.

It was previously claimed Mingus had got into an altercation with the unnamed woman - who was treated in hospital for a laceration beneath her left eye - during the San Gennaro street festival in Manhattan's Little Italy.

And the model explained the 24-year-old female and her friends had attacked him at the event.

Mingus claimed the woman seemed drunk and he "threw his arm out" to protect himself, accidentally striking her in the face.

He said: "It was instinct. I was reacting to them swarming me and was afraid for the safety of my group.

"We didn't think anything of it, but these five girls followed us for two blocks, throwing food at us and yelling. We told them to leave us alone, but they kept following, threatening to hurt my girlfriend and her friend.

"It was very apparent that these girls were under the influence and looking for a fight."

The model - whose parents were together from 1998 to 2003 - accused the group of having "swarmed" him on a corner, with one pulling my hair from the back, another throwing water in my face."

After throwing out his arm, police quickly got involved and Mingus claimed they "refused to listen to the context" when they saw one of the girls was hurt.

The 41-year-old composer has shared his delight that the streaming service's version of the musical - which featured ...Read More

Dame Helen Mirren has appealed for donations for the hungry and vulnerable at Christmas.

Adele has announced a Las Vegas residency at the Colosseum inside the world-famous Caesars Palace Hotel.

After much speculation over the 'Can I Get It' singer landing a stint in Sin City, including allegedly getting ...Read More

Aaron Carter has reportedly split from his fiancée Melanie Martin, days after they became parents.

The 'Crazy Little Party Girl' singer and his partner only welcomed their son, Prince Lyric, into the world last week, and...Read More

Cate Blanchett is "absolutely chuffed" to be Adele's fashion muse.

The 'Carol' star is happy to be admired for her sartorial choices by the 'Easy On Me' singer after she name-checked the actress in her '73 Questions' ...Read More

Iron Maiden have teamed up with Marvel on an exclusive merchandise collection based around their mascot Eddie.

The heavy metal legends fronted by Bruce Dickinson have joined forces with the Disney-owned company on designs...Read More