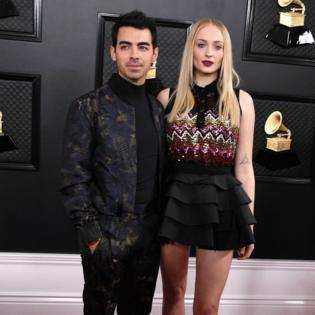 Sophie Turner quipped that her husband Joe Jonas failed to impress his exes by "sticking his fingers" in them as well as his "toe-curlingly lame" purity ring on Netflix's 'Jonas Brothers Family Roast'.

The former 'Game of Thrones' star laid into her other half on the comedy special, which sees Joe, 32, and his siblings and Jonas Brothers bandmates, Kevin, 34, and Nick, 29, ridiculed by their partners.

Sophie joked of the siblings' rings they wore as a sign of their chastity: "No, the rings weren't a good idea.

Joe briefly dated fellow Disney and 'Camp Rock' co-star Demi Lovato in 2010, and had a whirlwind five-month romance with supermodel Gigi Hadid, 26, in 2015, before meeting 'The One', Sophie.

"To be honest, Joe and the purity ring thing was kind of like a modern-day Cinderella.

"Joe tried to find a match for his purity ring a few times, but finally the finger fit me. And it's also like Cinderella because most of the girls he tried it with were under contract to Disney."

The 25-year-old actress then took aim at her spouse's acting skills.

She laughed: "I said when I started acting that I would never date an actor, and after I saw 'Camp Rock 2' I knew it was safe to date Joe."