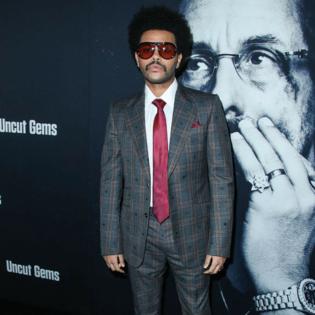 The Weeknd's 'Blinding Lights' has been crowned the greatest Billboard Hot 100 single of all time.

The 31-year-old megastar's record-breaking 2020 hit single from his acclaimed LP 'After Hours' has dethroned the '60s classic 'The Twist' by rock and roll legend Chubby Checker.

The 'Starboy' hitmaker's tune has spent 90 weeks in the US chart's top 100, while it has been streamed more than 2.5 billion times on Spotify.

It's claimed the track being used regularly on TikTok and The Weeknd's Super Bowl halftime show performance added to its popularity.

Pre-TikTok, 'The Twist' was also famously known for its dance routine.

Commenting on the feat, The Weeknd - whose real name is Abel Tesfaye - told Billboard: "I feel like I've been making that record for a decade."

The 'Earned It' hitmaker explained how: "I've always been tinkering with the [sounds of the] '80s. It was much more subtle before, but I've always wanted to completely dive into it. And 10 years in, I think I've earned it."

Elsewhere, the prolific artist teased his new record, seemingly titled 'The Dawn', which he described as like "purgatory" for the listener.

He said: "I started writing the [next] album during the pandemic, which felt like we're all in this scary, unknown territory.

"And I waited to make music I thought sounded like going outside -- I was obsessed with that feeling.

Kanye West's new album 'DONDA 2' is set to be released earlier than expected.

The 44-year-old rapper - who legally changed his name to Ye in 2021 - released the chart-topping album 'DONDA' late last year and the follow-...Read More

Jay Park has assured fans he has "not retiring yet."

The 34-year-old musician and record label executive - who has not released an album of his own since 2019 - took to Twitter to respond to rumours that he was quitting ...Read More

Mark Strong and Jodie Turner-Smith have boarded the cast of 'Murder Mystery 2'.

The pair will be joined in the sequel by Melanie Laurent, Kuhoo Verma, Enrique Arce, Tony Goldwyn, Annie Mumolo and Zurin Villanueva with ...Read More

Tessa Thompson has suggested that the romance in 'Thor: Love and Thunder' will be different from past Marvel movies.

Kanye West has vowed to be "the best dad" to his children.

Damon Albarn has apologised to Taylor Swift "unreservedly and unconditionally".

The Blur frontman incurred the wrath of the 'Lover' hitmaker by downplaying her songwriting ability in a recent interview, but after she ...Read More