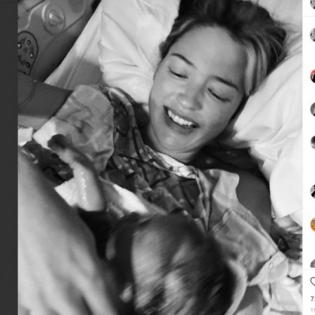 The 32-year-old supermodel and her fiance Jason McDonald welcomed their first child, a daughter they have named Emery, into the world on 6 November, she revealed on Instagram on Tuesday (23.11.21).

Sharing a black and white photo of herself and her daughter taken shortly after she'd given birth, Martha wrote on Instagram: "On the morning of November 6th, we welcomed our daughter Emery into the world."

Among the stars to congratulate Martha was former Victoria's Secret Angel Helena Christensen.

Martha confirmed in September she was expecting a baby girl and in June, she used Instagram to announce her pregnancy.

She wrote: "Full heart growing belly" alongside a picture of her pregnant stomach.

The couple announced their engagement back in January 2020 and Martha wrote on Instagram that they are keeping busy by "planning a wedding and preparing for our first child,".

The glamorous couple have been together for six years and ahead of the arrival of their first child, they expanded their family earlier this year by adopting a dog.

After meeting dog Coco on Zoom, the pair couldn't resist rescuing her from Hearts and Bones Rescue in Texas in March.

The new pup is settling in well, as the model took to Instagram, recently to gushh about their new pooch.

She wrote:" "Not a day passes that I don't appreciate what a difference she's made in my life!"

McFly have released a cover of 'Walking In The Air'.

The 'All About You' band - made up of Tom Fletcher, Danny Jones, Dougie Poynter and Harry Judd - dropped their own unique take on the classic Christmas track, which ...Read More

Britney Spears cried "tears of joy" on her 40th birthday.

The 'Toxic' hitmaker - whose conservatorship came to an end last month after almost 14 years - reached the milestone age on Thursday (02.12.21) and she felt "...Read More

The 52-year-old actor admitted it "helps" that he and his wife have one another for support in Hollywood, and they also know not to get taken in by the hype or "craziness" ...Read More

Joel Coen "missed" working with his brother Ethan on 'The Tragedy of Macbeth'.

George Clooney wants to shoot 'The Boys In The Boat' in his own backyard.

The 60-year-old star is co-directing the new movie about how the University of Washington's men's rowing team shocked the world to win gold at the ...Read More