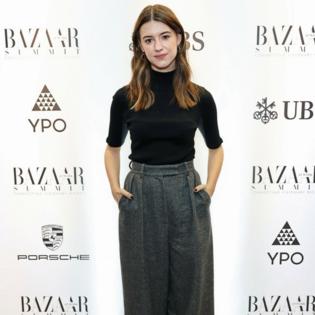 Daisy Edgar-Jones was nervous about the intimate scenes in 'Normal People'.

The 23-year-old actress shot to fame after her role as Marianne Sheridan in the drama based on Sally Rooney's novel, where she shared many racy scenes with co-star Paul Mescal, something she was uncomfortable with at first.

Asked if she was nervous at the Bazaar At Work Summit in London on Tuesday (23.11.21), Daisy said: "Definitely. It was my first time doing intimate scenes. I'd never done anything like that. I'd never done nudity.

"But one thing I felt very safe in the hands, of was working with Lenny (Abrahamson) who was amazing ... He's a very sensitive director, and those scenes were so beautiful in the book so I was excited to see how he could investigate portraying young love really truthfully."

'Normal People' made headlines for featuring in an intimacy co-ordinator for the racy scenes and Daisy admits that she was surprised it wasn't more of a common practice in the industry.

She said: "I find it very shocking that (intimacy co-ordinators are) new. You are simulating something, and you are very vulnerable in that moment. So, it was amazing working with Ita (O'Brien, 'Normal People' intimacy co-ordinator), she's really good at allowing you to have agency in those moments."

Daisy also revealed that she contacted Phoebe Dynevor following her performance in the Netflix smash hit 'Bridgerton' as she felt there were many similarities between the pair.

The 'War of the Worlds' actress recalled: "I remember watching 'Bridgerton' and thinking that her whole performance was so stunning and I started to see that she was getting very similar questions to what I was about the intimate scenes, and the show had a lot in common with 'Normal People', in that it was a love story... And both of us were relative newcomers.

"We had a Zoom call and it was nice to digest how we were feeling... I think it's really important as young actors to look out for each other."

Kim Cattrall was "never" involved with the 'Sex and the City' revival.

The 65-year-old actress - who played promiscuous PR Samantha Jones during the original run of the hit comedy-drama series and the subsequent two spin-...Read More

Edie Falco turned to alcohol when she couldn't afford drugs.

The 58-year-old actress - who has now been sober for three decades - revealed that her poor finances led her to hit the bottle as opposed to cocaine.

The 19-year-old singer was chosen by the animal rights organisation for "never staying silent" about animal protection, becoming the youngest person in history to be...Read More

Zachary Levi wants 'Shazam! Fury of the Gods' to be released sooner than 2023.

The 41-year-old actor is reprising his role as Billy Batson/Shazam in the DC Extended Universe (DCEU) sequel and admits that he wants ...Read More

Noomi Rapace says her role in 'The Girl with the Dragon Tattoo' left her with "pain and sadness".

The 41-year-old star shot to fame by playing Lisbeth Salander in the adaptation of Stieg Larsson's novel - as well as the ...Read More

Sir Paul McCartney wanted to "trespass" and get "busted" by police by playing The Beatles' last show at the Houses of Parliament.

The iconic band's Disney+ docu-series, 'The Beatles: Get Back', shows the Fab Four - which ...Read More