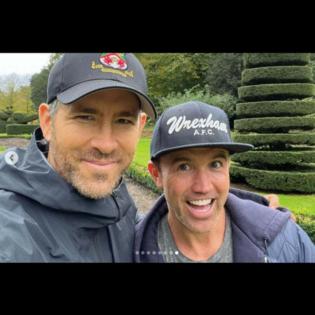 Ryan Reynolds described soccer as "soul deadening" after watching his first-ever game as the co-owner of Wrexham.

The 45-year-old actor became the co-owner of the Welsh club alongside Rob McElhenney in February, and he's taken to social media to reflect on his experience of watching his team slump to a 3-2 defeat at Maidenhead United.

Alongside some photos of himself and Rob at the game, Ryan wrote on Instagram: "Football is a staggering, heartbreaking, gorgeous, tommy-gun of soul-deadening, evil and beauty and I'm never sleeping again ever ever. @wrexham_afc @robmcelhenney (sic)"

Phil Parkinson, the Wrexham boss, was aware that the actors would be present at the game, and he knew they wouldn't try to interfere with his work.

He said: "They flew in and they were trying to keep a low profile but I imagine it's fairly difficult to be low profile and they let us get on with it."

Phil is now "looking forward" to meeting Ryan and Rob some time this week.

He told the BBC: "We look forward to meeting them later in the week. I'm really disappointed for them that we haven't been able to come away with at least a draw. But that's football. It can be a brutal industry."

Ryan and Rob previously outlined their long-term ambitions for the club after completing their takeover earlier this year.

The Hollywood stars - who are good friends - said it was their mission "to protect the heritage that has made Wrexham AFC and the Racecourse Ground such a special place to watch football for the last 156 years".

They added: "We understand and respect the intense loyalty and love for this club and how it's woven into the fabric of the town and its supporters."