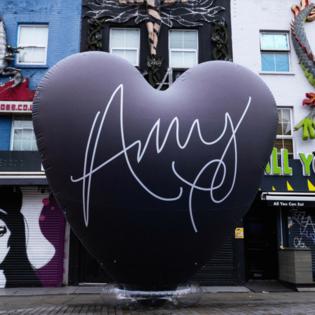 A 20-foot black heart has been erected in Camden to mark the 15th anniversary of the late Amy Winehouse's iconic 'Back to Black' album.

The 'Rehab' hitmaker's seminal 2006 LP celebrates the milestone today (27.10.21), and The Heart with Amy's signature "represents the love" that the singer - who died of alcohol poisoning on July 23, 2011, aged 27 - "poured into the making of 'Back to Black' and its emotional connection in the hearts of music fans across the world."

Another heart has been placed in front of The Roundhouse venue in the North London borough with the lyric "You go back to her and I go back to black" emblazoned across it.

In 2014, a bronze statue of Amy was unveiled in the heart of Camden.

What's more, Spotify UK has launched an enhanced album experience for 'Back to Black' - which marked the 'Tears Dry on Their Own' hitmaker's final album - with content created by Amy's record label and her Estate, exclusive to the streaming giant.

Fans can listen to the artists that Amy inspired talking about her influence and gain an insight into the music icon's creative process, and much more.

Among the artists to pen touching testimonials is 24-year-old rocker YUNGBLUD, who said listening to the album gave him the "confidence to be undeniably myself".

He said: "I think it's very rare when an artist comes along like Amy because she represented more than genre, more than music. She represented an attitude. I remember the first time I heard 'Back to Black', it completely changed my whole thought process and my whole identity and gave me confidence to be undeniably myself."

And R&B pop star Mahalia, 23, said: "She was always really special to me and someone I always looked up to and someone that I wanted to be just like."

The landmark record - which won five Grammys, including Record of the Year - has sold more than 22 million copies worldwide and catapulted the 'You Know I'm No Good' singer to superstardom.

The 47-year-old jewellery designer had claimed she got married due to the "emotional stress of COVID quarantine", and the pair ...Read More

The 91-year-old actress has been open about her experiences working with the famed director, and previously claimed in her memoir that ...Read More

Tom Ford is finding life "very hard" without his husband.

The 60-year-old designer-and-filmmaker's spouse Richard Buckley - who he married in 2014 after 27 years together - passed away in September at the age of 72 and ...Read More