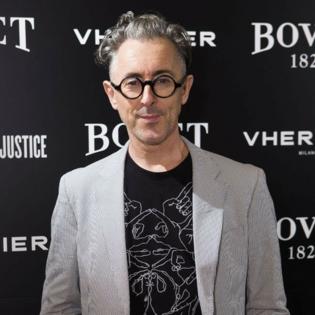 The 56-year-old actor was feeling suicidal before he landed the role of Boris Grishenko, a geeky computer programmer, in the James Bond film 'GoldenEye', and he looks back on his casting as a life-defining moment.

Reflecting on the day he auditioned for the role, he explained: "It was one of the worst days of my life actually. I felt really, really, really low. I just now think, 'Oh you poor little thing, you could've said I am feeling suicidal today.'"

Alan now admits his life was transformed by his starring role in the 1995 film.

"I have this sort of mantra, which is 'Cancel, continue.' When something bad happens I think, okay that happened, we can't change that, let's move on."

Alan previously admitted that he thought his career options were limited as a young performer on the Scottish theatre scene in the 1980s.

He recalled: "I was told that things were not available to me because of my Scottishness.

"America was never a thing. London was maybe a possibility. The idea that I would be doing what I'm doing now or have the opportunities that I have now, there was no one I knew who'd had that trajectory … those things didn't happen to Scottish people."

Alan also doubts that his sexuality harms his career prospects.

He explained: "The constant question I used to get was: 'Do you think that coming out is bad for your career in Hollywood?' It's such a ridiculous question.

"I don't think people in Basingstoke or Idaho are not going to go and see a movie because someone in it is gay. I really don't think they care."