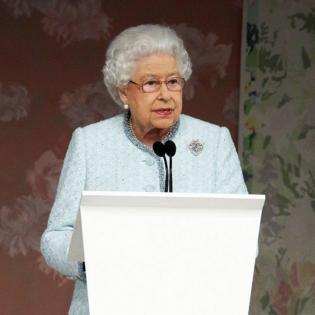 The 95-year-old monarch was scheduled to attend the high-profile event in Scotland, but she's now canceled her original plans after undergoing preliminary medical checks in hospital last week.

Buckingham Palace said in a statement: "Following advice to rest, The Queen has been undertaking light duties at Windsor Castle.

"Her Majesty has regretfully decided that she will no longer travel to Glasgow to attend the evening reception of COP26 on Monday, 1 November.

"Her Majesty is disappointed not to attend the reception but will deliver an address to the assembled delegates via a recorded video message."

Last week, Buckingham Palace confirmed that the Queen had gone to hospital for "preliminary investigations", and she stayed overnight before being sent back home to Windsor.

A spokesperson said at the time: "Following medical advice to rest for a few days, The Queen attended hospital on Wednesday afternoon for some preliminary investigations, returning to Windsor Castle at lunchtime today, and remains in good spirits."

It's believed that the overnight stay was for practical reasons, and the monarch was back at her desk on Thursday afternoon and was undertaking light duties.

Since then, an insider has claimed that the Queen has been left "knackered" from watching TV late at night and a series of lunches with friends.

The monarch was officially said to be in "good spirits" around the time of her hospitalisation - but in reality, she's been feeling exhausted, according to a source.

The insider shared: "She is knackered."

The source explained that, as well as a busy schedule of public engagements over the last few weeks, the Queen has been just as busy in her down time thanks to a "constant flow of lunches and dinners with family and friends, because the Queen does not want to dine alone".

The 51-year-old actress says her 1927 Spanish-style house in Toluca Lake, California, used to be owned by an actor who appeared in Western ...Read More

Aaron Carter claims he is "trapped" in his bedroom because his ex-fiancée Melanie Martin "will not leave" his house.

The 33-year-old singer announced on social media this week that he and Melanie had called off their ...Read More

Prince William will discuss mental health on a special holiday episode of 'Time to Walk' for Apple Fitness+.

The Duke of Cambridge is set to appear on the upcoming festive episode of 'Time to Walk', which will be launched...Read More