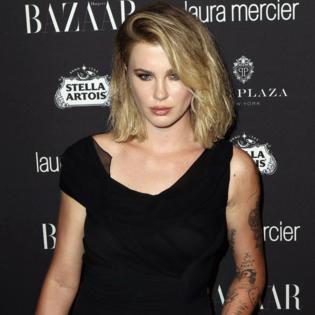 The 26-year-old star has revealed she's stepping back from social media following the tragic death of the cinematographer, who died on the set of the Western movie 'Rust' after being shot with a prop gun by the actor.

Alongside an Instagram video of her mum Kim Basinger, Ireland - who turned 26 on October 23 - wrote: "It's been a heartbreaking and weird couple of days.

"I'm going to take a little break on here other than some required posts I have to post for work in the upcoming week.

"Thank you again to everyone who's reached out and wished me a happy birthday. For now, I'll leave you with a video of my mom dancing in a goth bar."

Meanwhile, Ireland also blasted Candance Owens after she criticised her father on social media and claimed the accidental shooting was "poetic justice" after his criticism of Donald Trump.

She fired back: "You are the most disgusting, human, cancerous human being I've ever come across.

"Regardless of your foul opinions most of the time, the fact that you would disrespect the life of a woman who was accidentally and tragically killed...Shame on you."

She added: "Yup... I'm going to go ahead and take that Instagram break. I am ashamed to breath the same air as this woman."

While Ireland added that people are welcome to their own political beliefs, she urged them to always remain "respectful".

However, she later revealed the pair had then had a "real conversation" as she shared a screenshot of them thanking each other for the chat.

She wrote: "Some times having an actual conversation can go a long way... (sic)"

In one final post, she said: "I will always stand for what I do... but one thing we need less of in this world is perpetuated hate and anger and fighting... especially in the wake of this tragedy.

"Thanks, again, to everyone who have been so kind and supportive."