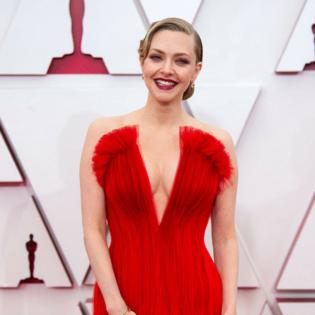 The 35-year-old actress - who has four-year-old daughter Nina and an 11-month-old son with husband Thomas Sadoski - revealed "something went wrong" during her delivery last September, but thankfully she is fully recovered now.

She told People magazine: "I had something that went wrong with my second birth. The baby was okay but it was tricky and it was painful and it didn't have to happen, and it did so it added an extra level of trauma...

"I'm OK. It was a very physical thing and it was a spinal thing, but I'm OK."

The 'A Mouthful of Air' actress admitted it wasn't easy when she and her son first came home from hospital but she and her 45-year-old spouse had no choice but to just get on with things.

She said: "You just do. At that point, I'm very freshly out of the hospital, I had to feed him, my husband was with my daughter and I had people that could drive me back to the hospital."

And Amanda struggled with the fact her regular health checks suddenly stopped, as well as being bombarded with medical bills while still trying to recover.

She recalled: "I went to the doctor every week at the end of my pregnancy and all of sudden it's like, 'Bye, here's some hospital bills!' I mean, I kept receiving them and I'm still healing from something."

The 'Mamma Mia!' actress - who previously revealed she doesn't think she would ever stop taking medication for OCD - was "terrified" of contracting postpartum depression but did all she could to avoid the condition.

She said: "I was terrified of suffering from postpartum depression. I ended up doing a lot of CBT therapy before I had my first kid and then I was really lucky, I didn't suffer from any depression and I felt like I had won in some way.

"It was hard, and it was so hard, the struggle, but it wasn't anything I didn't think I could handle. And with my second kid, that's partly because I was on my medication and I never got off of it."