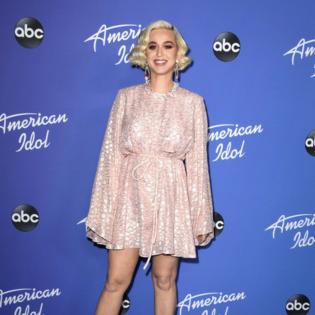 Katy Perry says being a mother is similar to being a pop star.

The 'California Gurls' hitmaker became a mum in 2020 to one-year-old daughter Daisy Dove with her partner Orlando Bloom and compared it to her career while doing a guest hosting stint on the 'Ellen DeGeneres Show.'

The 37-year-old singer said on Monday (25.10.21) episode: "So so proud to be her mother. It's an experience unlike any other. Now that I'm a mom my life is totally different and yet I realized, it's kind of similar to being a pop star.

"You're up all night, usually holding a bottle of some kind, there's vomit on the floor, and your boobs are always out."

Katy previously described her daughter Daisy as the "greatest gift".

Speaking last year, the star said: "I think what children do, in general, is teach you that all you need is love."

The 'Firework' singer also explained how she has had to "strike a balance" since becoming a mother.

Katy shared: "I made a conscious decision to become a mother, but I didn't know until I became a mother that you have to strike a balance. [Motherhood is] all the clichés and more. Let me tell you as someone who has done and seen everything, there's nothing better than having a beautiful, pure child. They're just the epitome of love."

Daisy's birth was announced - via Instagram in August 2020 - by the happy couple, who said: "We are floating with love and wonder from the safe and healthy arrival of our daughter."