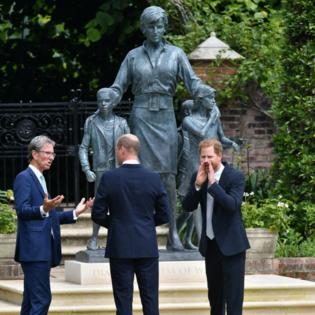 The Duke and Duchess of Cambridge hosted the delayed function to mark the unveiling of the bronze tribute to the royal siblings' late mother - who died in a car accident in Paris on August 31, 1997, aged 36 - at Kensington Palace earlier this week, as thanks were given to the donors of the statue erected in the Sunken Garden of the royal residence.

And a source has now revealed the 39-year-old prince gave a "brilliant speech" on behalf of them both and claimed the unveiling of the statue in the summer did their relationship " some good".

They told The Sun newspaper: "It was very intimate and sweet.

"There was a real family feel as many of Diana's 17 godchildren were also there.

"William made a brilliant speech saying thank you from him and Harry and how happy they both were with the statue.

"He mentioned Harry by name. The brothers are barely on speaking terms but it's clear the Princess Diana statue has done some good."

It was claimed at the time of the unveiling that coming together to celebrate their mother helped the pair find common ground again following reports of a feud between them.

Harry, 37, and his wife, Meghan, Duchess of Sussex, 40 - who live in Santa Barabra - didn't fly back to London for the bash earlier this week.

However, it was reported that Harry contacted those who contributed to the statue personally.

Due to the COVID-19 pandemic, the statue unveiling in July massively scaled back.

Diana's sons - whom she had with ex-husband Prince Charles - commissioned sculptor Ian Rank-Broadley to create the touching tribute to their mother.

The brothers hope the statue is seen as a lasting symbol of the "life and legacy" of their parent.

They said in a joint statement at the time: "Today, on what would have been our Mother's 60th birthday, we remember her love, strength and character - qualities that made her a force for good around the world, changing countless lives for the better.

"Every day, we wish she were still with us, and our hope is that this statue will be seen forever as a symbol of her life and her legacy.

"Thank you to Ian Rank-Broadley, Pip Morrison and their teams for their outstanding work, to the friends and donors who helped make this happen, and to all those around the world who keep our mother's memory alive."