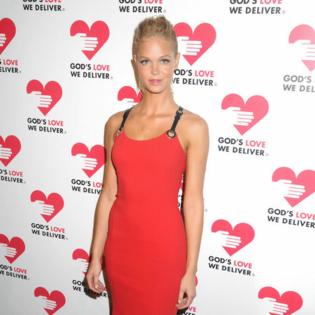 Erin Heatherton used diet pills to lose weight during her time as a Victoria's Secret model.

The 32-year-old star - who was an Angel for the lingerie, fashion and beauty brand between 2010 and 2013 - revealed the pressure she felt to stay thin, and the measures she went to after speaking to a nutritionist.

Appearing on the 'Fallen Angel' podcast in a clip posted by PEOPLE, she told hosts Justine Harman and Vanessa Grigoriadis that the nutritionist started her "on this diet pill called phentermine", which is an amphetamine-like prescription appetite suppressant.

Noting her therapist later described it as "bathwater meth", she said: "I don't know. I was just like, 'Let me Lance Armstrong this because I'm renovating my condo. I can't lose my job right now.'

"I started injecting myself with HCG [a hormone produced during pregnancy called human chorionic gonadotropin]. I was just like, 'Help me lose weight. What do people do?'

"He suggested something this other model did that worked for her. This is this nutritionist to the stars, whatever. I don't know. I started like a diabetic injecting my stomach every morning.

"I look back at it as like emotional cutting because I was so against everything that I was doing, but I was just reluctantly doing it almost to feel the pain or feel how wrong it was."

The Michael Kors model started to worry about her weight gain when she hit 25, which she believed was because her metabolism slowing down.

She added: "There was this certain point where everything that I was doing just didn't yield the same results.

"I was just a little bit bigger. In retrospect, that's just biology and how the body works. You're not the same size when you're 18 to when you're 25."

She alleged the brand was never concerned with her well-being.

She said: "I don't have any faith that these people really cared about me. You know what I'm saying? It's just about business."

Meanwhile, Victoria's Secret told PEOPLE in a statement: "There is a new leadership team at Victoria's Secret who is fully committed to the continued transformation of the brand with a focus on creating an inclusive environment for our associates, customers and partners to celebrate, uplift and champion all women."

Addison Rae is still "figuring out" her style.

The 21-year-old star admits to agonising about her appearance and what fans think of her - but she's still trying to develop her personal style.

Cardi B thinks fame is "boring".

The 29-year-old rap star - who is one of the world's best-selling music artists - admits that being famous isn't as exciting as people imagine.

The 'WAP' hitmaker - who has Kulture, three...Read More

The 60-year-old comedian hosted the awards show five times over a decade and Ricky relished the opportunity to mock Hollywood's rich and famous.